After the presentation of the fore running Limited Edition models at the IAA in Frankfurt and the EICMA in Milan, HOREX celebrated another spectacular world première at the “Motorräder” show in Dortmund in early March: the presentation of the new HOREX VR6 Classic and VR6 Café Racer series production models. Both versions of the high-end power cruiser will go on sale in June 2016.

Both the VR6 Classic and the one-seater VR6 Café Racer are produced to the same exacting standards as the limited-run special edition VR6 Silver Edition and VR6 Black Edition. They also use the same proven VR6 engine as the limited edition models. It uniquely combines compactness and performance and achieves a slightly reduced output for the series production models (163 HP instead of 171). It has once again been thoroughly optimised and improved for a powerful acceleration and perfect driveability. The highest standards of driving experience, quality and value have been applied.

Thanks to the use of lightweight carbon fibre technology for many newly developed components, the new HOREX series production models also tip the scales at weights totally ready for competition: 219 kg (Café Racer) or 224 kg (Classic). The Café Racer series, like the HOREX VR6 Black Edition, is the first series production motorcycle to use a carbon fibre steering head frame. This first-to-market development was driven by parent company 3C-Carbon Group AG, further emphasising HOREX’s lead in high-technology lightweight solutions.

The vehicle and component design for the brand new VR6 models was carried out almost entirely inhouse, and the HOREX VR6 Black Edition has already been awarded with the 2016 Red Dot Design Award. The specialists at 3C-Carbon Group have also set new standards in materials and processing quality.

There’s something very special behind each HOREX VR6

Each engine and bike is assembled into a masterpiece with great passion via a state-of-the-art manufacturing process. Every step is monitored and documented using modern quality control systems. Each HOREX VR6 can be tailored and configured according to the client’s personal requests. Both HOREX series production models, for example, are available in new colours exclusive to HOREX.

The HOREX VR6 Café Racer is available in high-end HOREX Black, HOREX Silver or HOREX Crystal White. The side heritage design stripes are also available in gold, silver or red. The HOREX VR6 Classic is available in HOREX Racing Green, HOREX Dark Red, HOREX Brown and HOREX Crystal White together with heritage stripes in gold, silver or metallic black. The seat of the HOREX VR6 is made from top-quality leather – even finer than that used by the exclusivity departments of automotive manufacturers. Clients can choose between brown and black HOREX leather colours.

The development of the HOREX sales network is running at full speed. The focus of the new sales team is the exclusive client experience. In addition to quality and excellence, a premium product in a defined high-end segment of the motorcycle market requires comprehensive service to provide the special HOREX experience. The client will always be given a choice between different options:

The HOREX VR6 Classic and VR6 Café Racer will go on sale in June 2016. Models can be configured and reserved before this date via the HOREX website (www.horex.com). A vehicle configuration tool will be unveiled in early April. Prices will start at EUR 38,500 (Classic) and EUR 42,500 (Café Racer), both including German VAT. 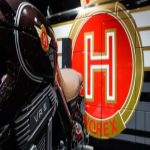