The new HOREX VR6 that was completely revised under the direction of the 3C Carbon Group AG will be in the starting block in three weeks. The new Horex returns to stage on the world premiere on the IAA this year, on which the glamorous story had begun once in 1923.

HOREX is the symbol of strong tradition – the company used to be one of the biggest manufacturers of motorcycles during its glory days. In 1923 the world premiere of the first HOREX-Motorcycle was celebrated on the International Automobile and Motorcycle Exhibition in Berlin.

With the introduction of the new model, the brand HOREX will return to the market more convincing than it has ever been before. Within the past months the 3C development team from Landsberg am Lech has provided anything for the new VR6 in a way passionated motorcyclers have always dreamt of and all they ever wished for their exclusive HOREX.

You are welcome to take a getaway into both, the past and the future, of HOREX at the same time and experience a spectacular comeback of a great brand! 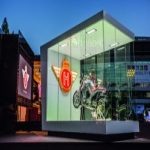