Less weight, coupled with improved handling. State-of-the-art technology ensures maximal competitiveness. The Horex VR6, known since 2010, is currently being brought to a new level by the development team of the mother company 3C-Carbon. The novelties are to be presented at the European motorcycle fairs in the autumn of 2015.

Under the new direction, the Horex VR6 is currently undergoing a drastic cure. To create an attractive and, equally, exclusive package for motorcycle enthusiasts with a great affinity for technology, numerous improvements will be implemented, but fundamental innovations will also be integrated. Weight-savings lead to significant advantages with regard to handling and driving dynamics.

The drive train of the motorcycle has already undergone a prominent change. Characteristic in this regard is a cutting-edge exhaust system as well as the modified manifold-system, with a significantly enlarged cross section. The exact details will remain under seal until the official world premiere of the Horex new edition. However, it is no secret that the output curve of the compactly-designed Horex VR6 has become significantly more homogenous. The more evenly-distributed power development was a key aspect of the development engineers’ focus.

The spectacular 1.2 litre six-cylinder VR engine and optical style elements, such as the frame and tank have been preserved. Traditionally, the Heritage Spirit is reflected as form line on the harmoniously curved tank. In turn, a rear section, in a completely new, puristic design, emphasises the classic-sporty character of the motorcycle. For improved ergonomics, the seat bench was given a new design. By the removal of the back seat, the Horex VR6 can in future also be driven as a pure solo machine. 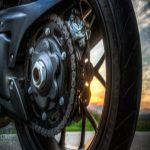